It was definitely one of our weirdest decisions. The electrician came in the morning to look at an outlet that wasn’t working properly. We worked on some house projects then did a bit of clean up in the yard. Then – about 1pm we decided it was actually a really nice day for a drive. Where should we go?? How about Napa.

In the car. Google Maps engaged. To Do list left at home. And off we went…

It was a bit of an odd time to go to wine country. The vines haven’t really started growing yet. But because of that, it was interesting to see the old, gnarled trunks – and wonder how many years they have been producing fresh new vines and grapes for our eventual enjoyment. 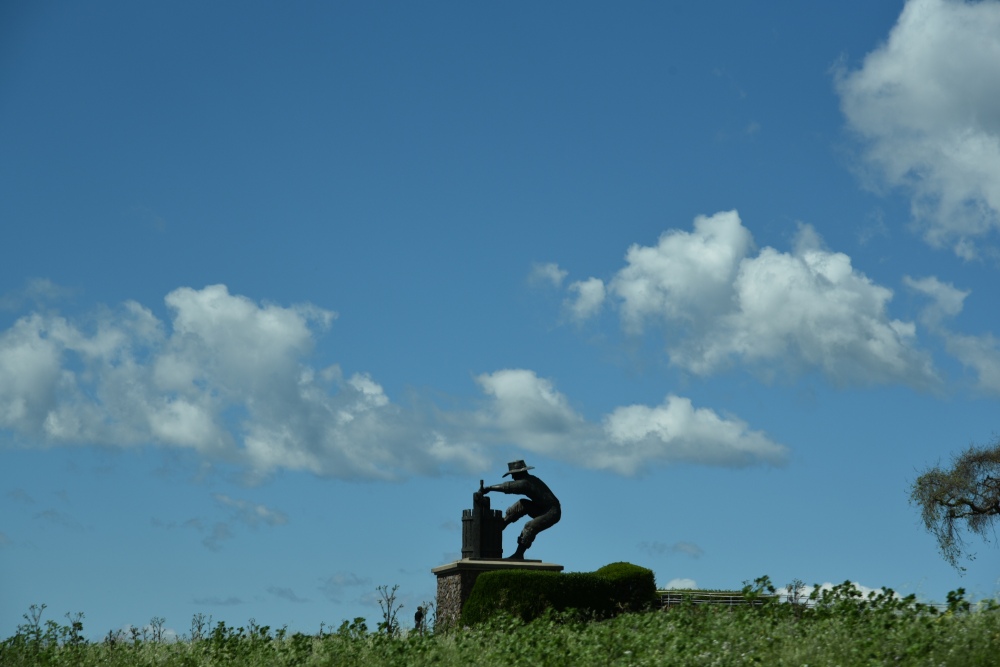 We were headed to Calistoga, California. I read in my handy-dandy California guide book (that has post-it tabs sticking out all over it) that Calistoga is a quaint little town to visit. So that’s what we plugged into our GPS.

On our way to Calistoga, however, we saw a sign for a Visitor’s Center and wondered if it would give us any additional information. So Scott scooted over some highway lanes and exited…

We literally had no idea what exit we had pulled off on.

Yountville, California. First of all, for any fellow Chef Geeks out there, this is MECCA for fine dining. If you’re a fan of Chef’s Table on Netflix, you might recognize The French Laundry. Chef Thomas Keller is a renowned chef who has been named Best Chef in America and has two restaurants with 3-star Michelin ratings. (The only American chef with that distinction.) Plus his bakery has a 1-star rating.

I think we drove for quite a few blocks with my hand over my mouth, gasping. When we finally stopped and got out, I almost felt disrespectful taking a picture of this famous restaurant. Many renowned chefs have spent time here, learning under Chef Keller’s instruction then gone on to open their own fine dining restaurants. (Sidenote: after we got back home I googled to see if there were any prices online…knowing there most likely wouldn’t be. But I found multiple sites that simply stated that a meal for two would run no less than $300 a person.) 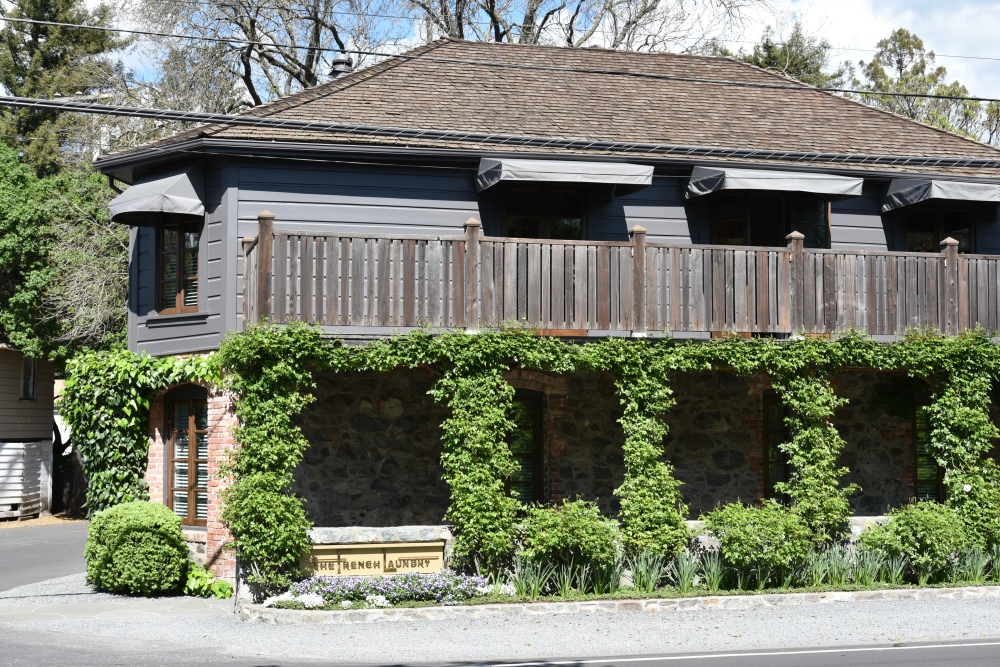 Full disclosure: one of the reasons I remember the restaurant from Chef’s Table is that I loved the font of the restaurant title. I guess I’m an even bigger Font Geek than a Chef Geek. -ha! 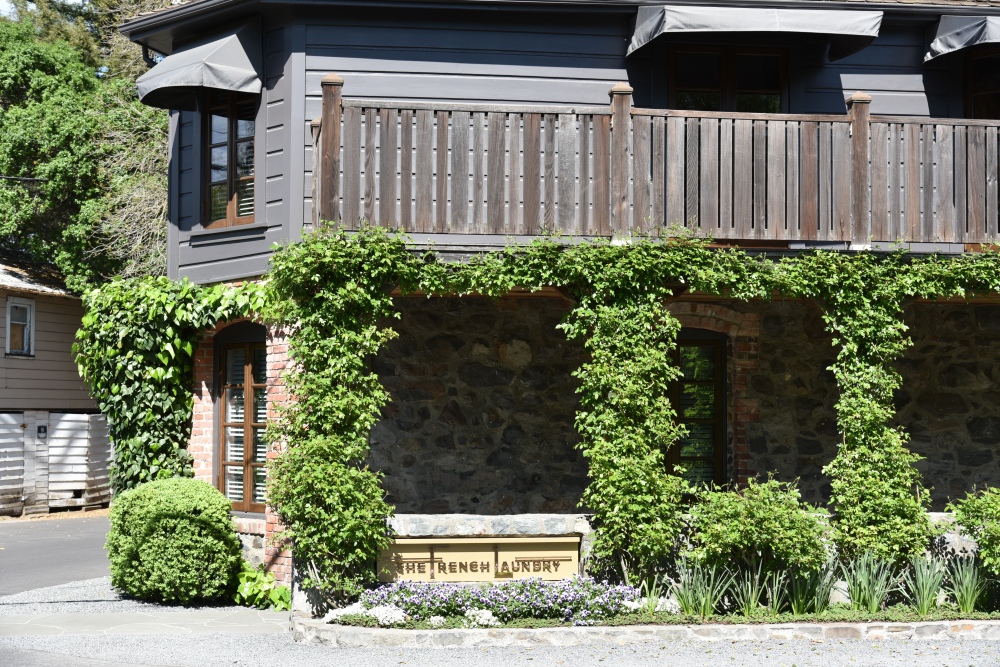 The sun was SOOOOOO high and bright so taking pictures was a challenge.

It was fascinating to see sleek, modern wineries as well as old and elegant wineries, all mixed in together. Each were competing for wine tastings and ambiance. One after another after another. 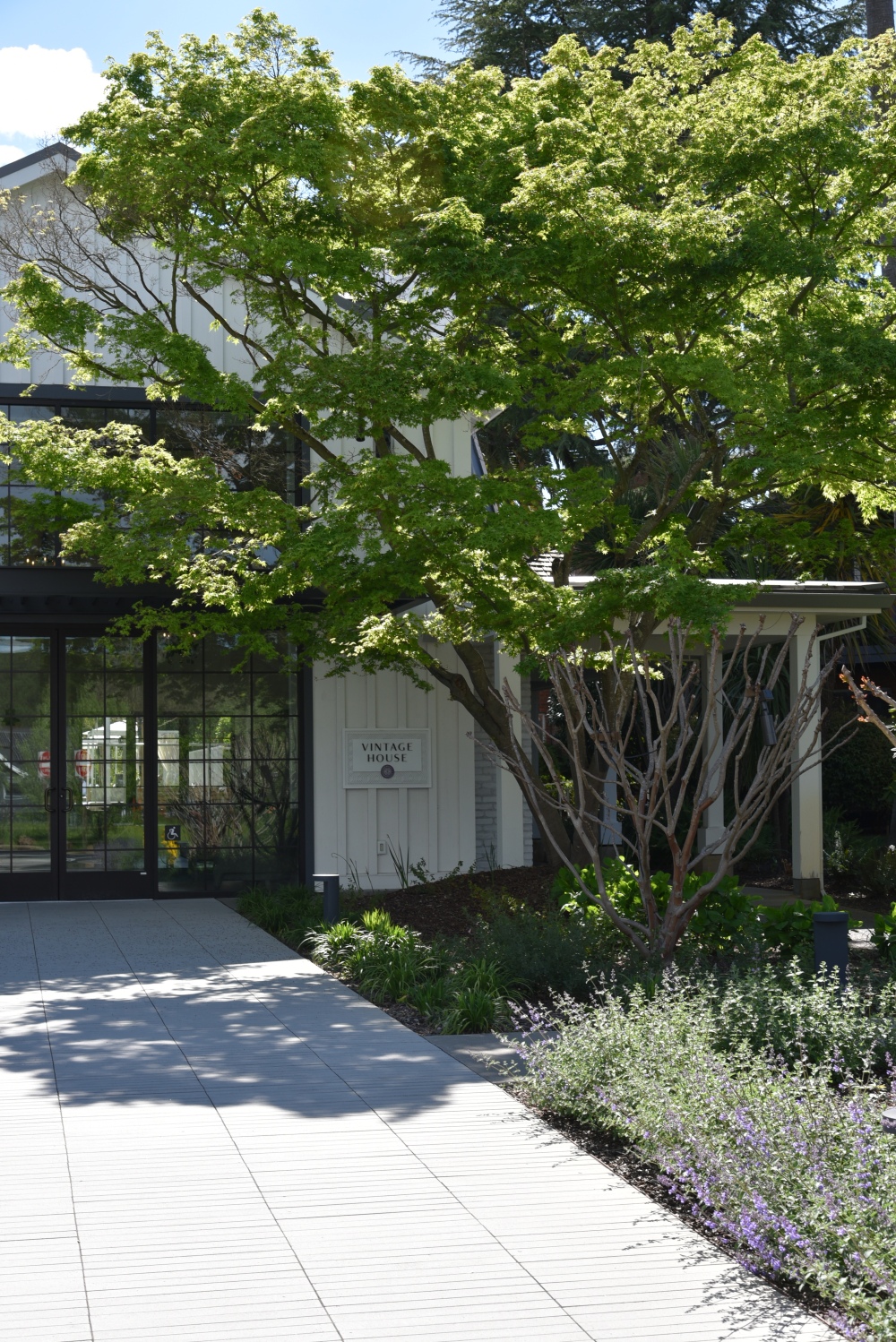 The wisteria. The phlox. The cherry blossoms. The dogwoods. Everywhere in California – it’s simply been amazing to see spring on the west coast. It is impossible to describe the brilliance and magnitude. 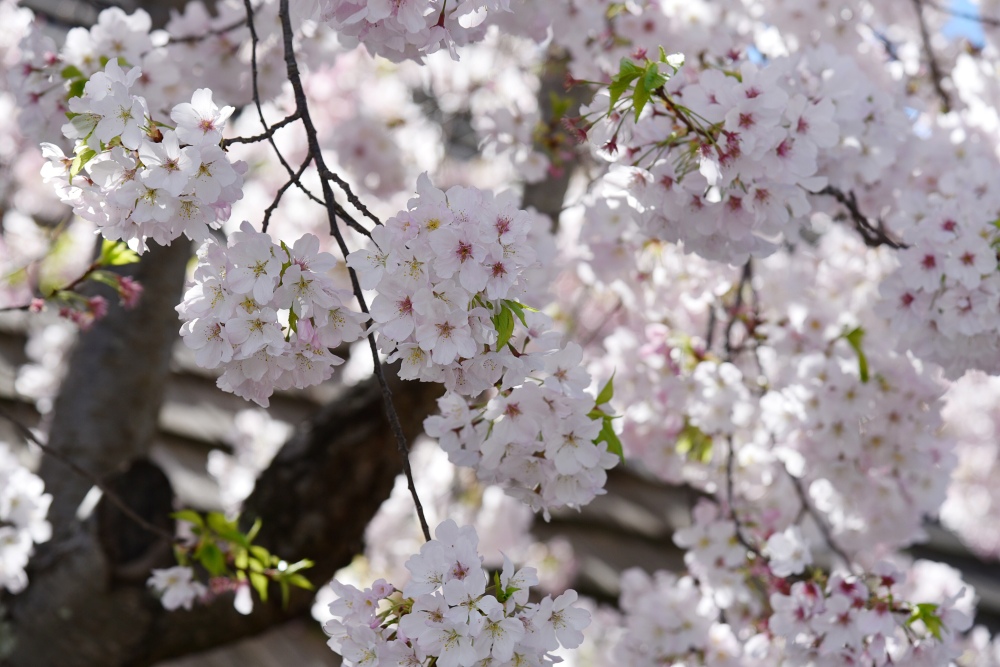 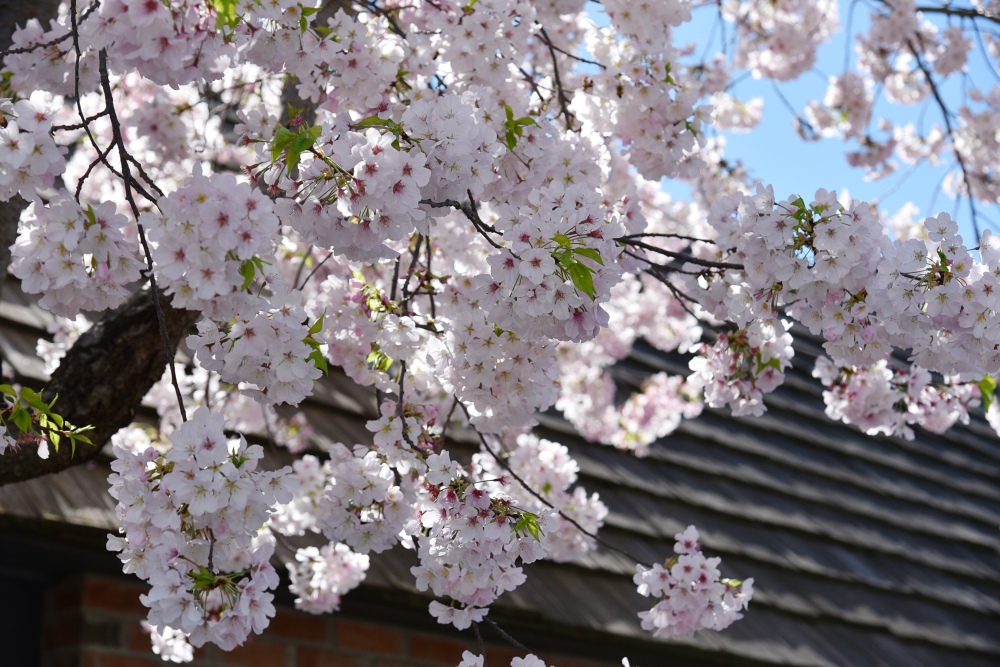 Scott and I were fascinated with these two men…

The man and the baker carrying out bags of bagettes to his car. What’s the story?! I was so curious. Their difference in stature certainly stood out on the cozy sidewalks of this fascinating town.

We weren’t dressed properly for the $300/per meal (…and by ‘dressed correctly’ I mean a checkbook with $600 of disposable loot) but we did have the flakiest, butteriest, delicious’est Michelin-star croissant I’ve ever had at Bouchon Bakery. 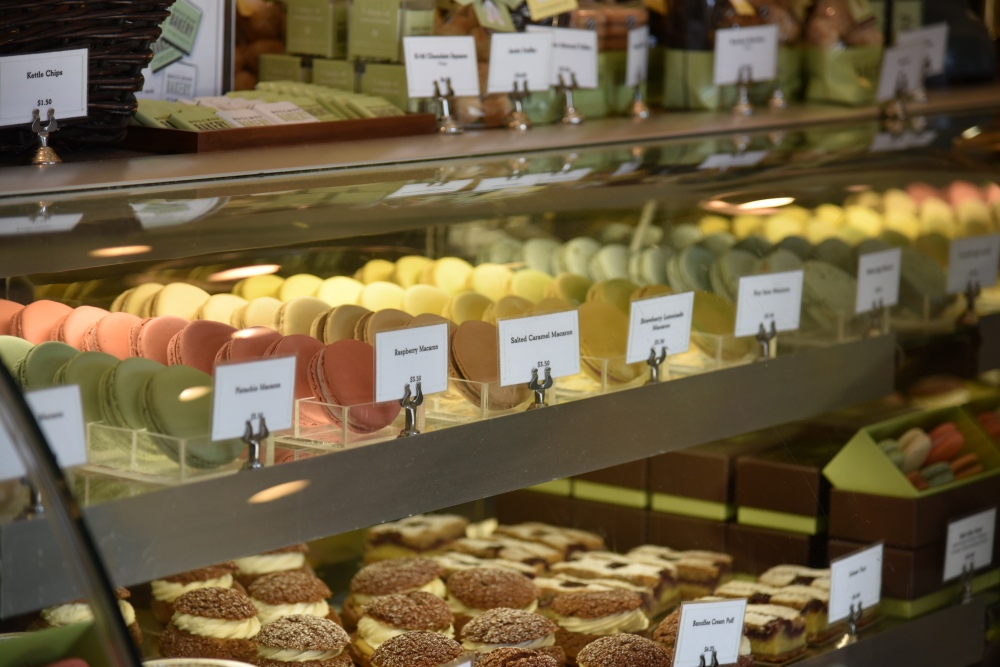 Yountville wasn’t necessarily a ‘walk and shop’ type of town. It was filled with luxury everything: hotels, spas, wineries, restaurants. There was a Marketplace area we walked through with a few shops, chocolatiers, cigars and of course – wines. 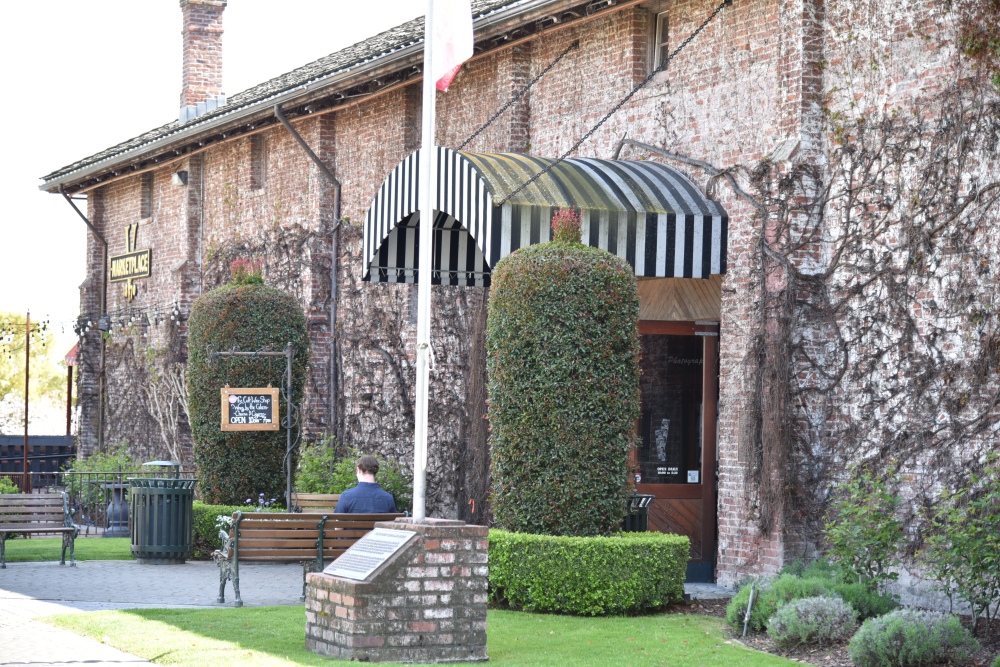 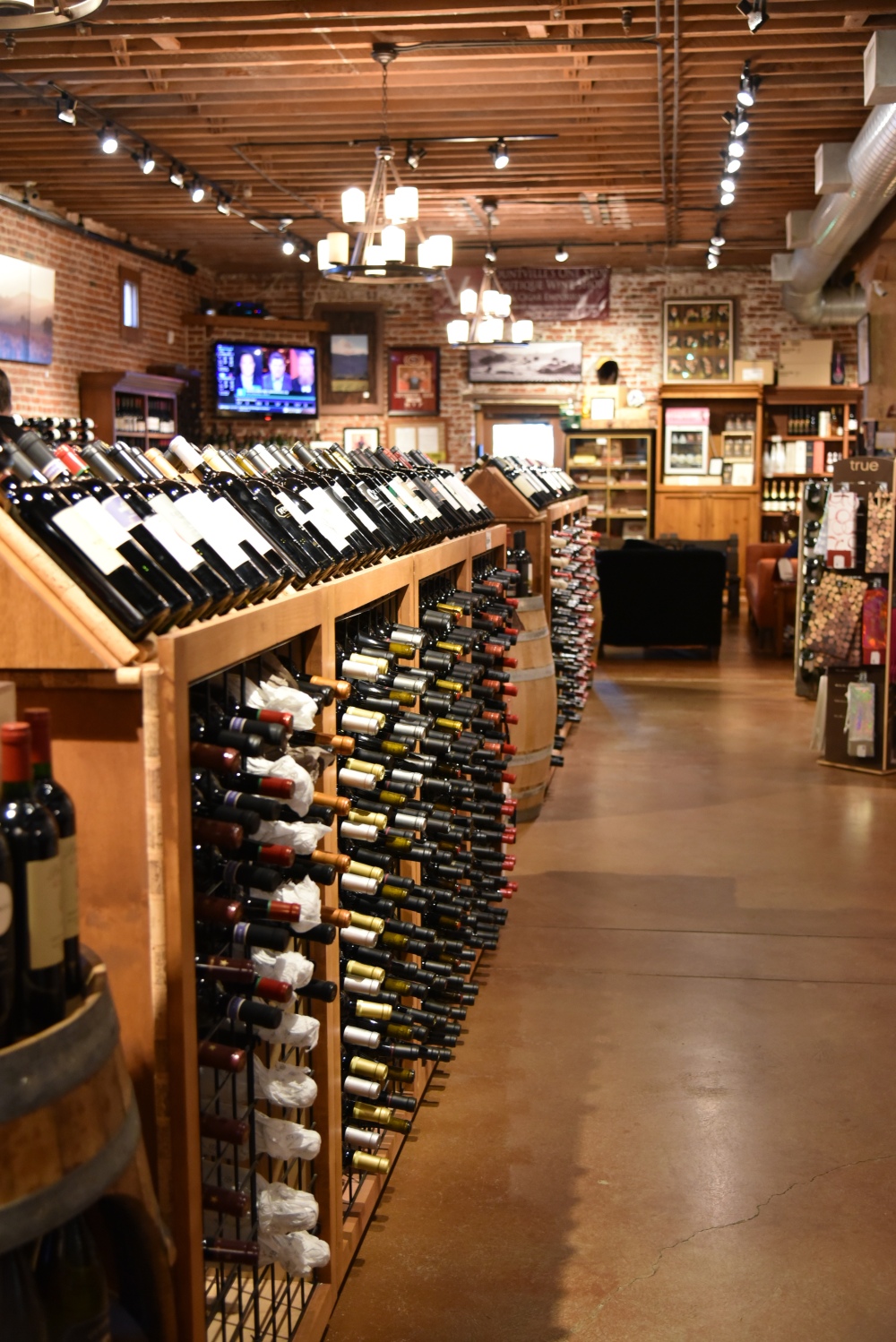 If you look closely, you can see the bubble above Scott’s head as he counts zeros… 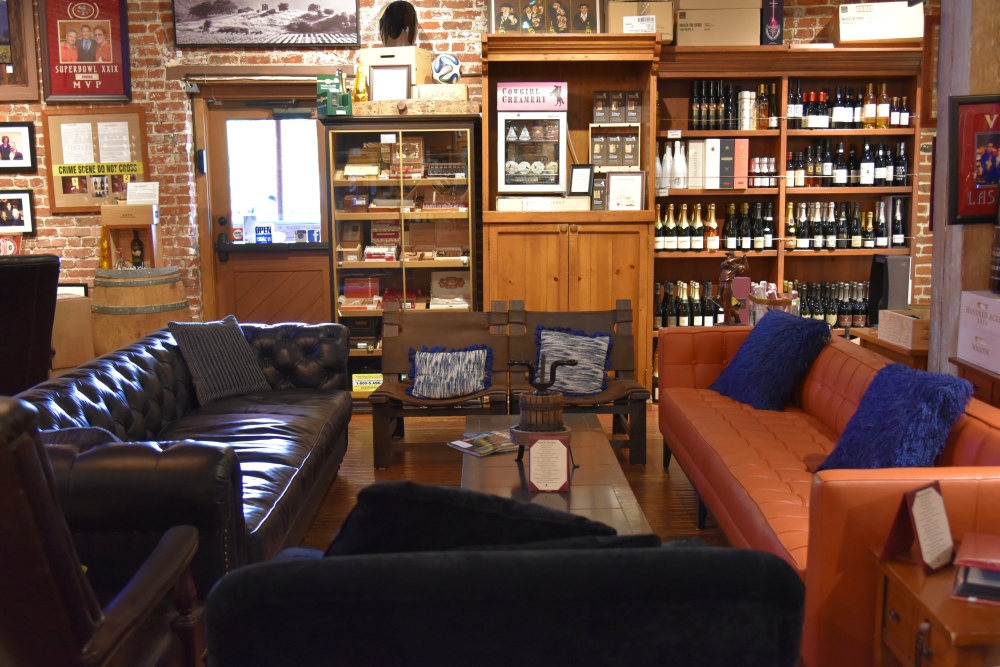 I liked this t-shirt…!

(Is this heaven?!) This side of heaven or the other side – I will be a Vespa owner.

This was a large courtyard that I’m sure is used for events and tastings. 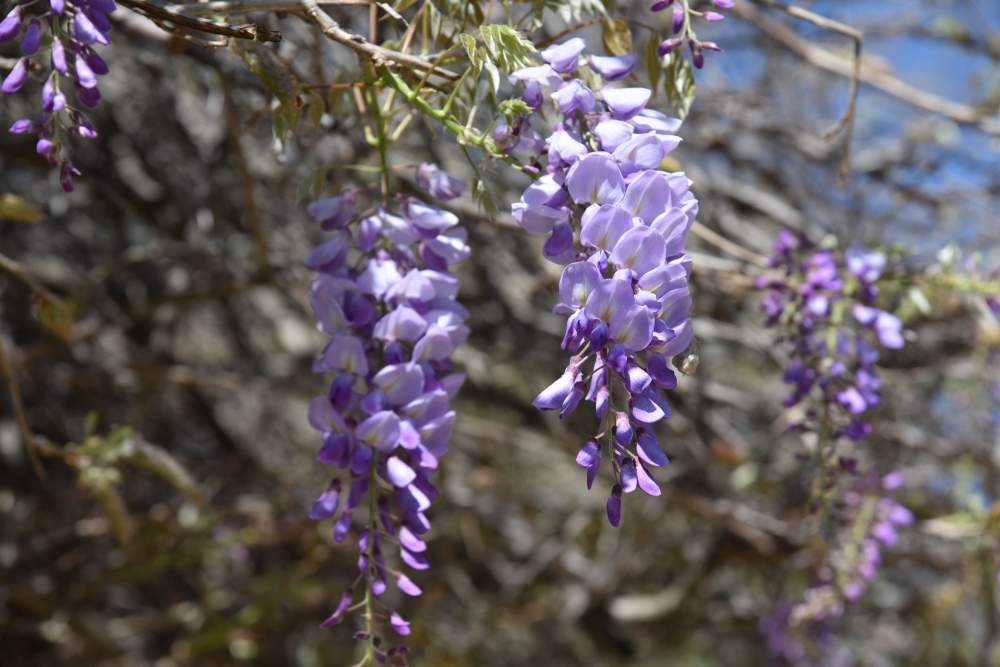 The design of this hotel and spa took my breath away as we drove by on our way into town. As we walked by, we went over to read it’s history…….I shouldn’t have been surprised…

My old alma-mater: USGBC. To receive a LEED Platinum is very difficult. But to do it as a hotel is almost unheard of. It is very difficult for a business like a hotel to prove environmentally sound procedures. Think of the laundry and toiletries alone. So for Bardessono to have achieved the top LEED level is incredible. One of only two hotels in America to have been awarded a Platinum level. Impressive! 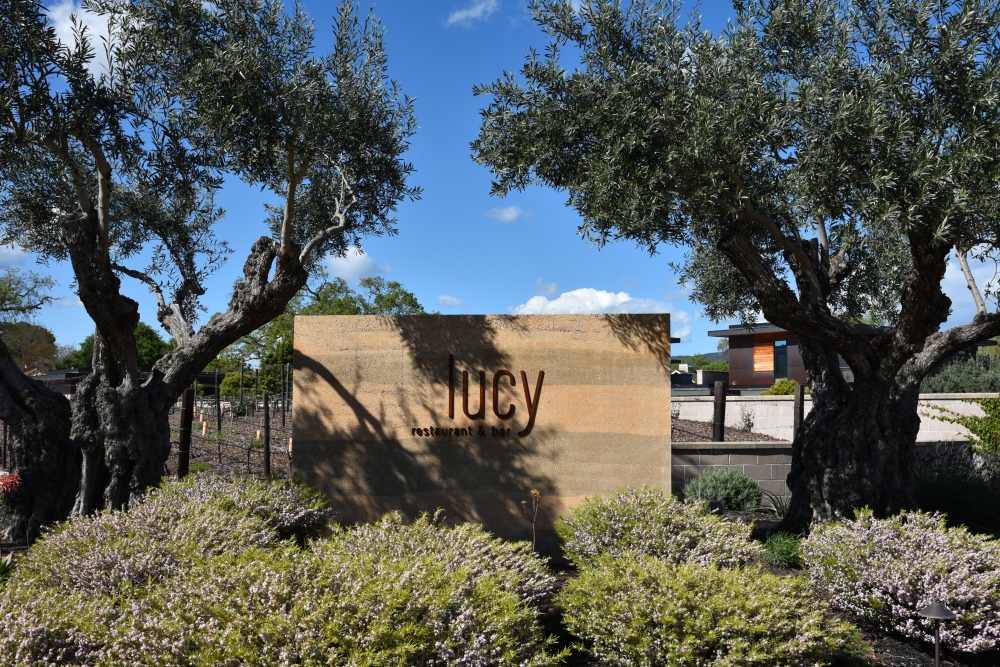 And right across the street was this old French Country Inn. Everything about it looked like a cottage tucked away in a the French countryside. Like I said, the old with the new. It was a heady combination and provided lots of visual stimulation overload. 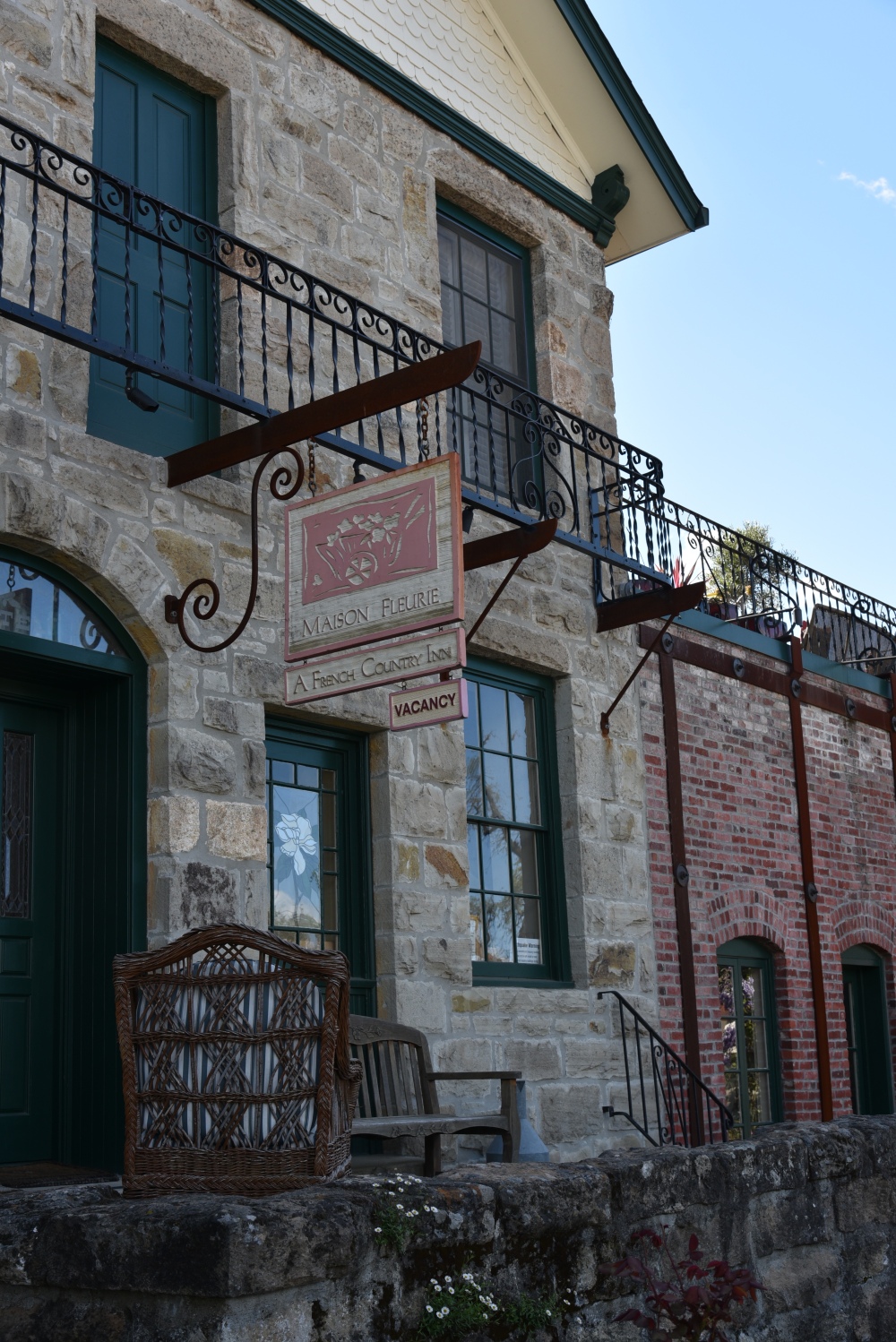 Scott liked this sign in their window stating that in case of an earthquake, this building was not safe to be in.

But at least it’s not a Midwest tornado that we would have to go through this door to the basement. Yikes! 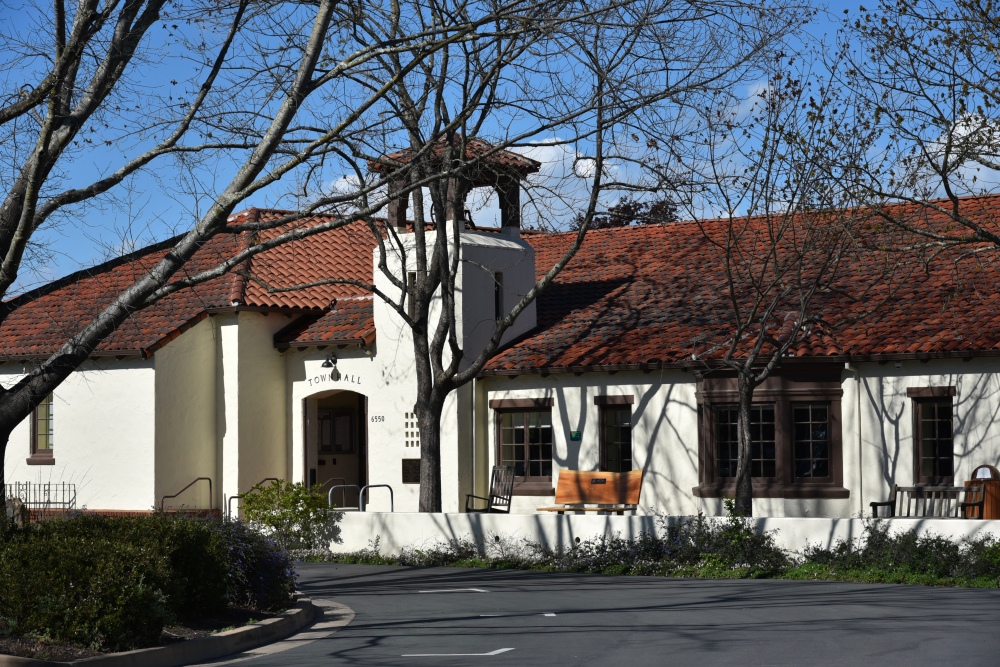 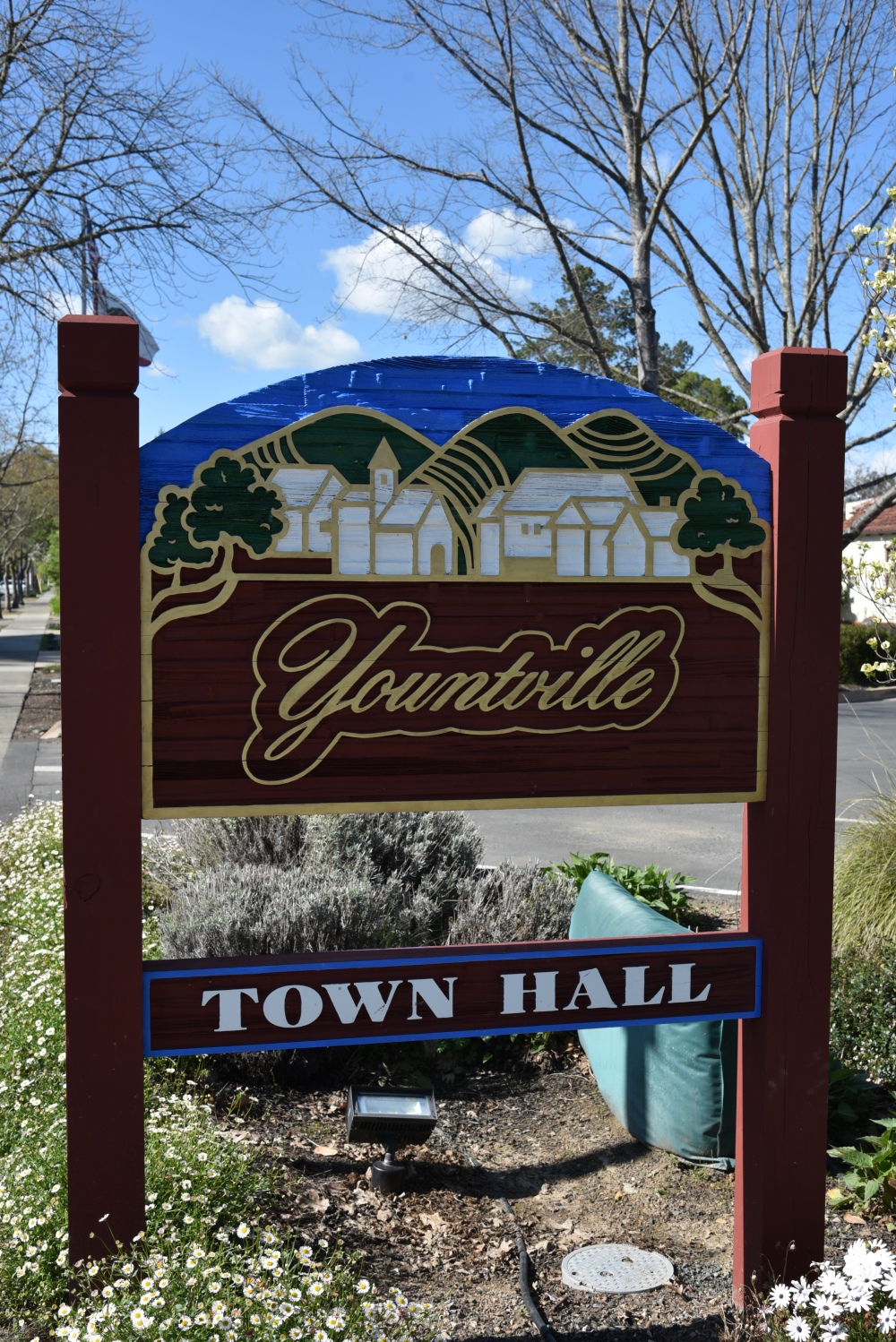 There were tourists walking all over town – in their linens and flowy skirts. It was like being on a movie set. But along with the tourists were plenty of residents. People out walking their dogs and working in their yards.

Another constant throughout the city (due to the time that we were there…around 4:30pm) were wait staff. Men and women in starched black and white attire. They were getting out of their cars and heading into work. Most of the restaurants were only open for dinner so they were arriving to work to start a busy night. I would like to believe their tips are substantial.

After our jaw-dropping walk through Yountville, we went back to our car to keep driving to our original destination: Calastoga.

This site uses Akismet to reduce spam. Learn how your comment data is processed.